I have written before about Rabbi Shemariyah Menasheh Adler, an erudite talmudist and controversial figure who was not afraid to take on and sharply critique rulings of the prominent British Rabbonim of his day.  Rabbi Menasheh Adler was born in Warsaw in 1872 and died in Brighton, England on May 24th, 1959.  He was a Ger Chasid and a member of the Black Lion Yard shtiebel called Kehal Chasidim at 14 Black Lion Yard in the East End of London. (It was totally destroyed by German bombing in the London Blitz.).

This book was the first of a series, all called Mareh Cohen.  It was printed by Israel Narodiczky in Whitechapel in 1919.  It was published bound together with another small book by the same author, Zichron Elchonon, written about passages in the Shulchan Aruch.  There are references to Rabbi Abraham Isaac HaCohen Kook throughout these books, and Rav Kook provides a nice Haskomo (approbation) to Zichron Elchonon.

My copy is signed – sort of – an autographed copy.  There is a dedication which a previous owner has partially erased.  If you look very carefully at the last line of the scan on the right you can see the words (in Hebrew) Menasheh Adler.  There is also a correction, shown on the left, written in the same hand as the dedication, written in excellent manuscript handwriting.

I have scanned the beginning and introduction below to give an idea of the scope of this book, and I have chosen an extract of pages that relate to an important and interesting controversy.

One theme that unites these times is war.  The First World War – then known as the Great War – had a profound effect on those who went through it, both as a catalyst for change in society and for provoking thought.  My late grandfather, Sidney Maynard, who was in the Royal Flying Corps (the predecessor of the Royal Air Force) told me that before the war, almost everyone that he knew was frum (religious). When many of the young men came back from the war, after four years or so of not being able to keep kosher or keep Shabbos properly, they were no longer frum.

Shemariya Menasheh Adler, as we shall see, had a lot to say about halachic leniencies that were allowed by the Rabbinate during the war.  His friend, Rabbi Abraham Isaac Kook was stranded in London during the war and was the Rabbi at the Machzike Hadath Shul in Brick Lane. His book on war, “HaMilchamah”, written during the war, but published afterwards, in 1922, has themes of halachic militarism.  Menasheh Adler also devoted a later volume of Mareh Cohen to the question of whether a woman can take part in a war.  His view was that in the event of a Milchamat Mitzvah, as defined in the Mishnah, Sotah, women were obliged to go to war with the men.

In 1916, the British Government approached the Chief Rabbi, Dr. J. H. Hertz, and asked whether Cohanim were permitted to serve in the British Army, as they were likely to come into contact with dead bodies.  Rabbi Hertz ruled that Cohanim could serve in the British Army. He offered halachic reasons why the prohibitions of impurity by a Cohen do not apply in times of war. Menasheh Adler argued with Rabbi Hertz. He agreed with his conclusion, but for different reasons, including questioning whether Cohanim today really were Cohanim.  You can read more about this in the extract below, after the table of contents, which shows the scope of the book. 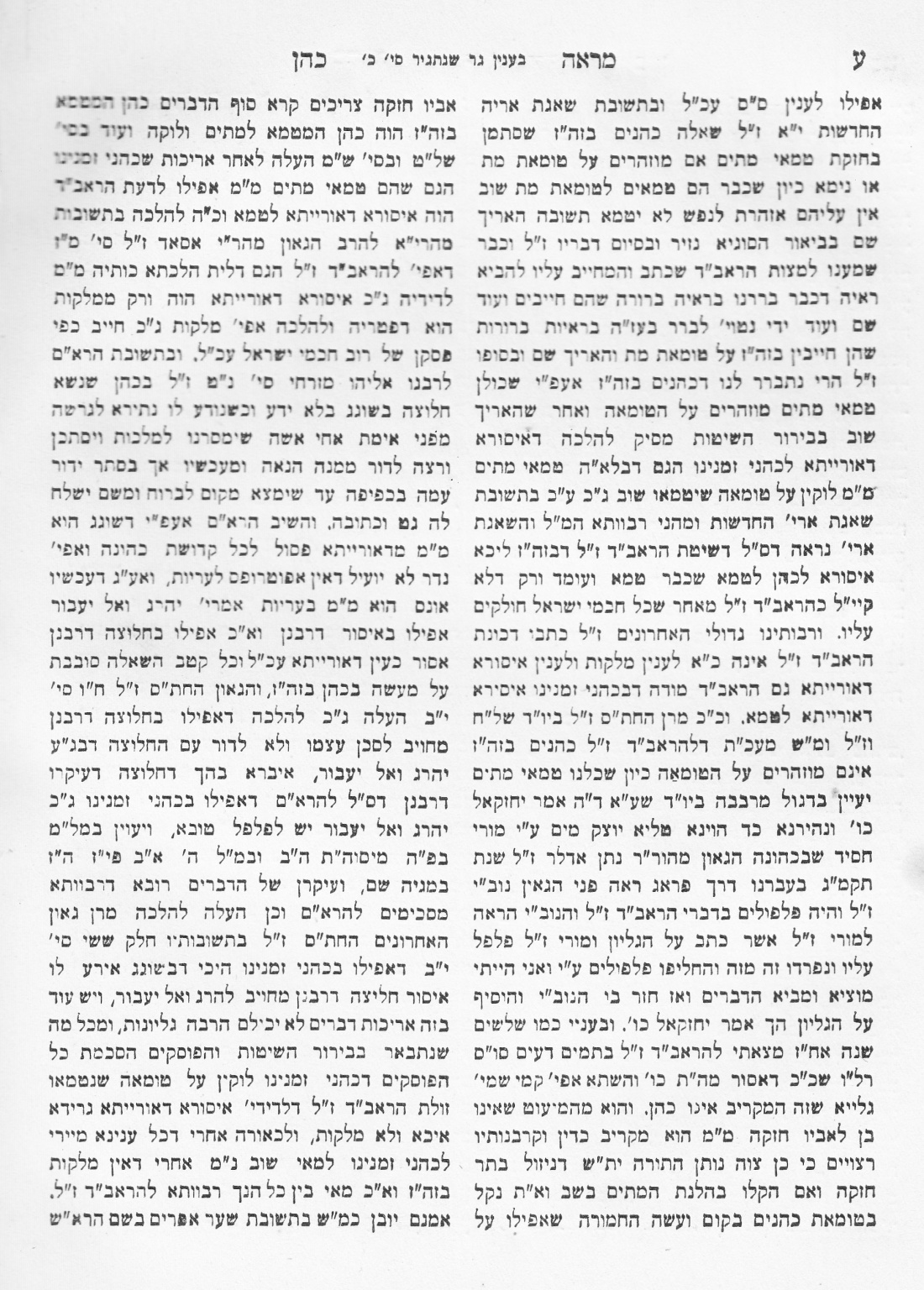 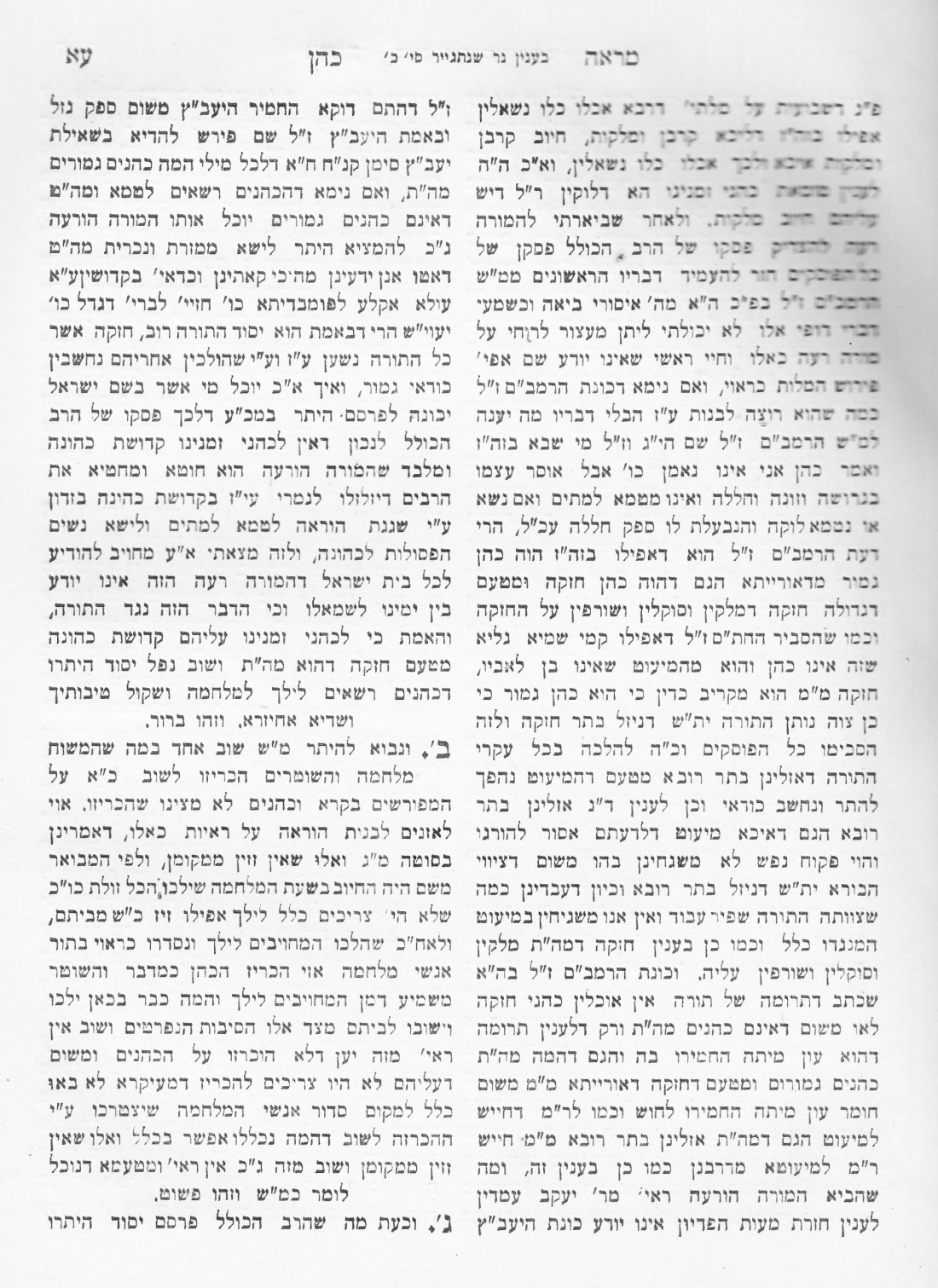 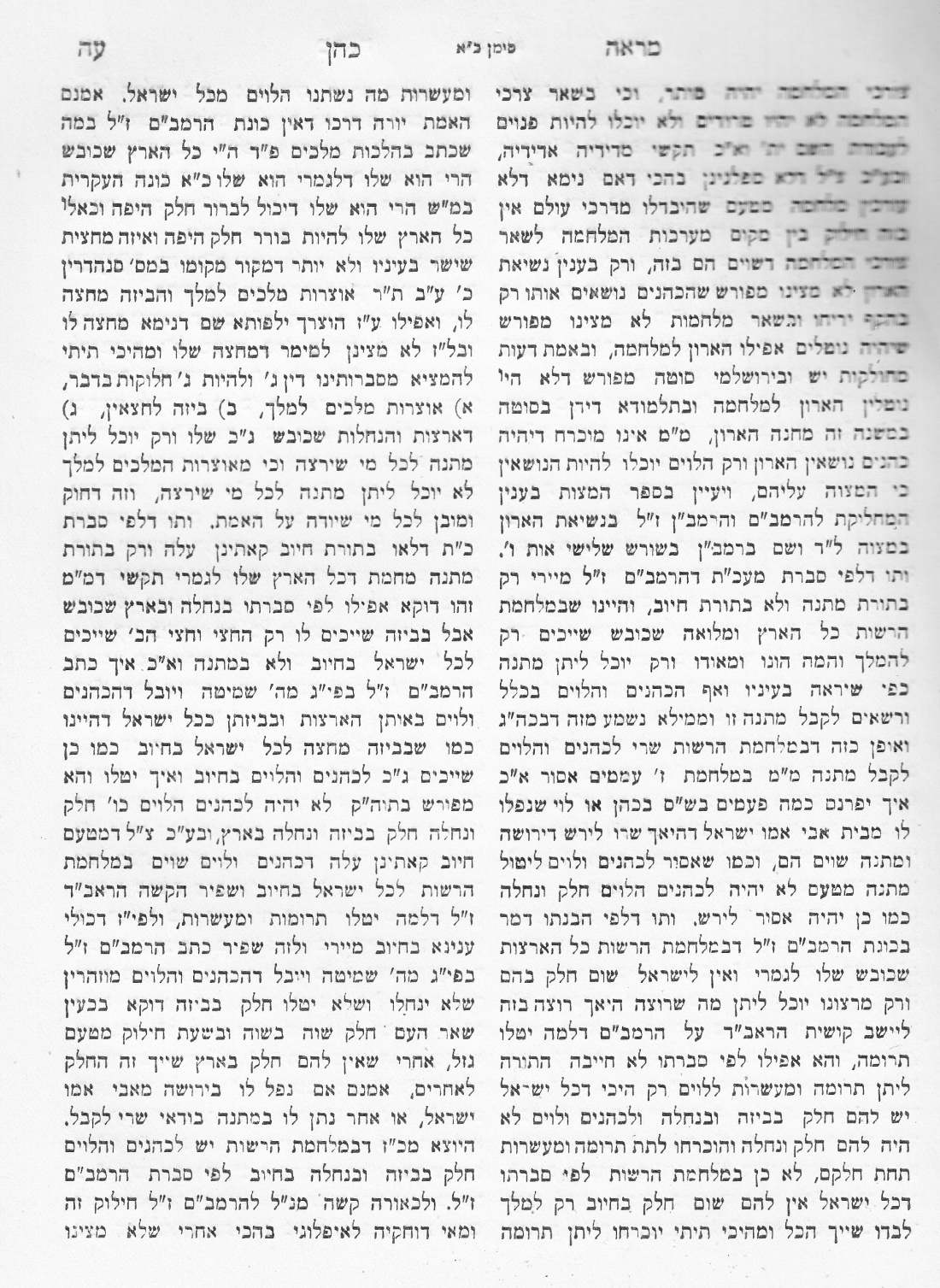 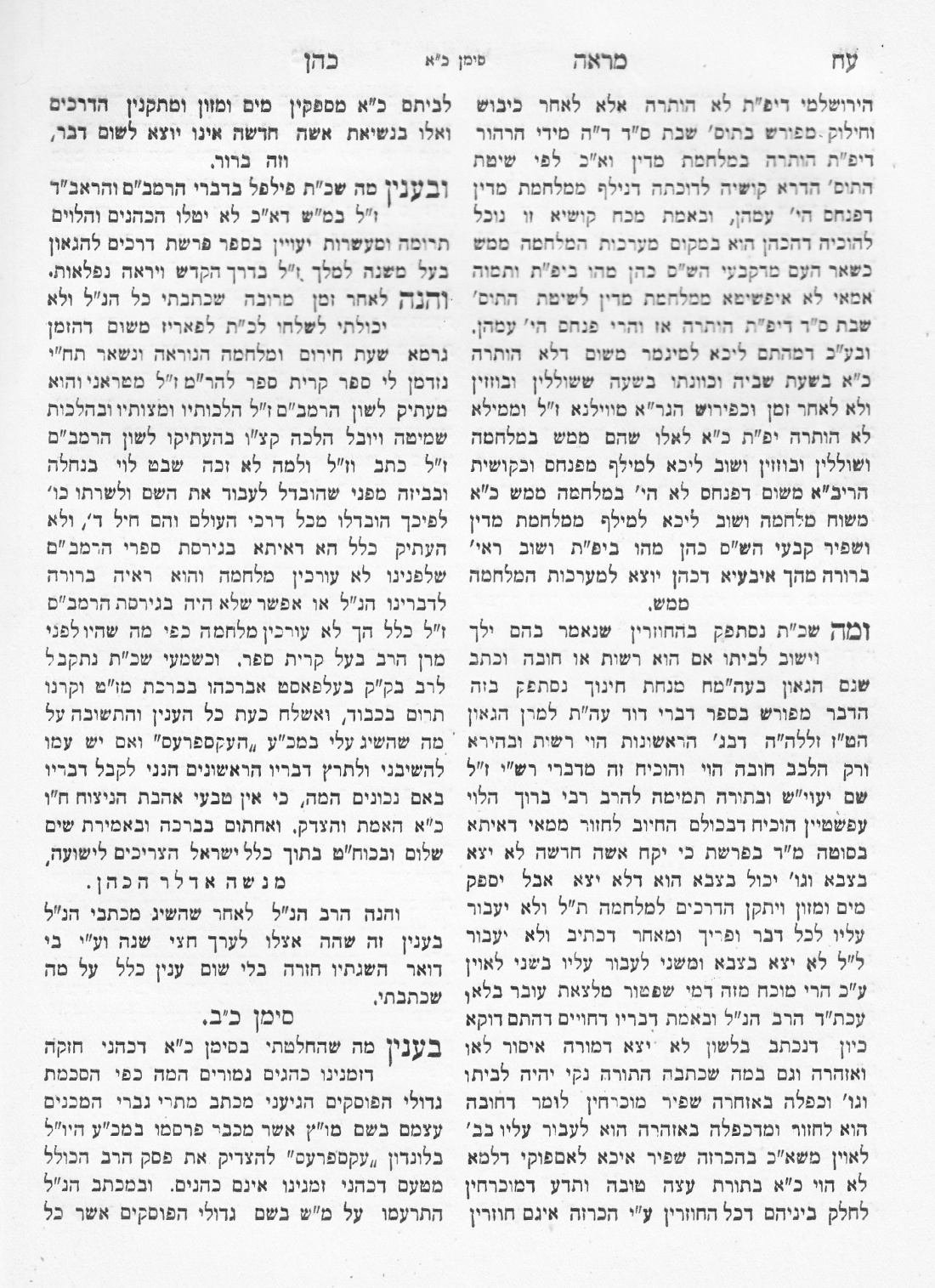 Here is the Haskamah (approbation) of Rav Kook: 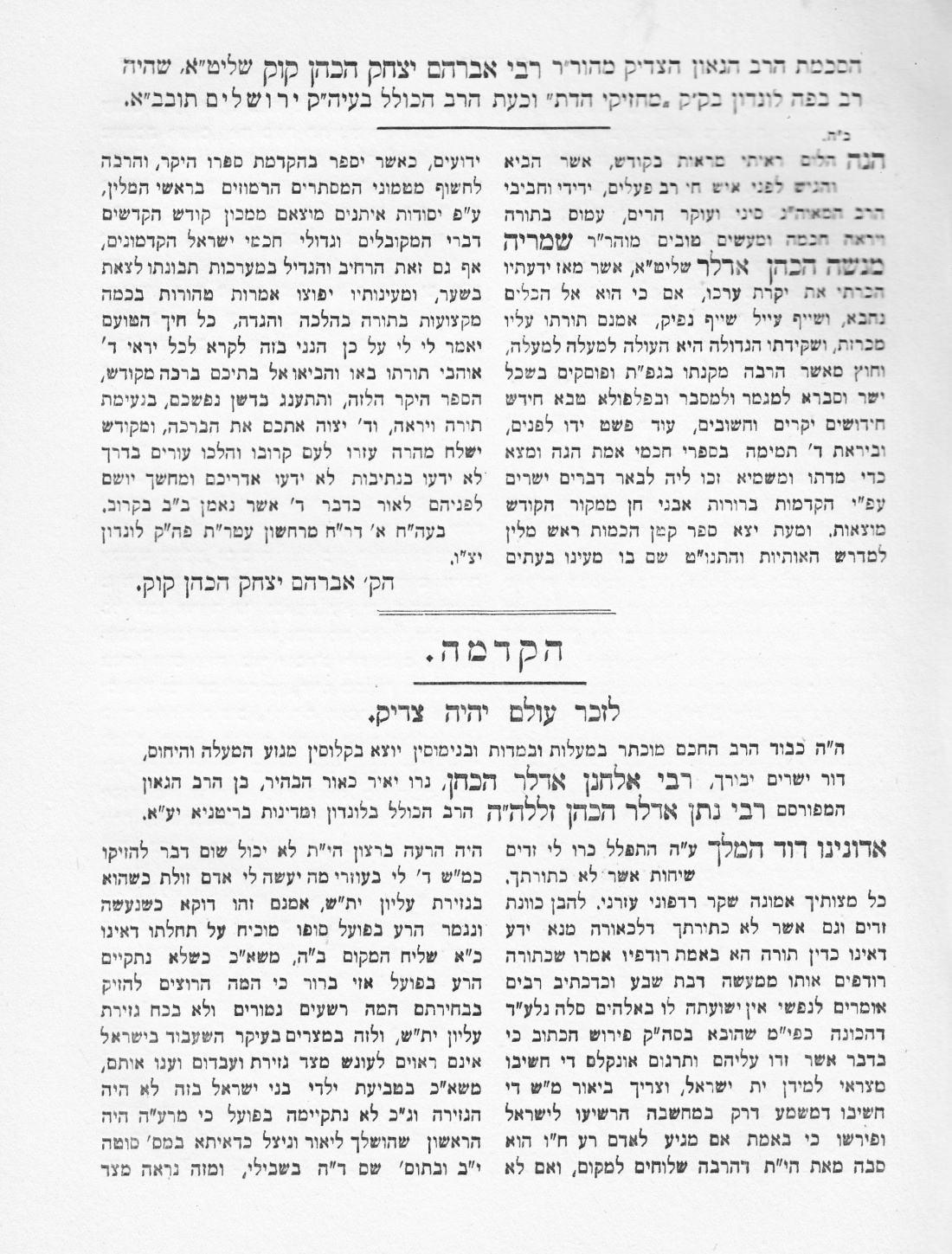