This is a ten volume set of encyclopedias, the first comprehensive encyclopedia in the Hebrew language.  The editor, Julius Eisenstein undertook this work in response to perceived limitations of the English Language Jewish Encyclopedia.

Julius (Judah David) Eisenstein was born in Miedzyrzec Podlaski (known to the Jews as Mezirich) on November 12th, 1854.  In 1864 his father was the first Jew from Mezirich to emigrate to the United States, and his family joined him in 1872. He died in New York City at the age of 101.

Subscription lists of all purchasers of the encyclopedia are included in all volumes except the first.  These are of interest not only to students of American Jewish history, but also others.  The lists of British Jews are very interesting and demonstrate a strong audience for this encyclopedia from orthodox Anglo-Jewry.  The British subscribers include, among others:
Asher Ginsberg (Achad Ha-am), Rev. M. Hyamson, Rabbi Aaron Hyman, Joseph Massel of Manchester, Elkan Adler, L. A. Bisco of “Glasgow, England”, Rabbi M A Chaikin of Manchester, Dr. J. Chotzner, Rev. Dr. Moses Gaster, Rabbi Israel Jaffe of Manchester, Rabbi Dr. Salis Daiches of Sunderland, Rev. A. Newman, Aaron J. Price of Liverpool, Rabbi S. J. Rabbinowitz of Liverpool, Rabbi Isaiah Raffalovitch of Liverpool, Rev. J. Livingstone of Bradford, Dr. Adolf Buchler and Rabbi Victor Schonfeld.

I have scanned all the subscription lists below: 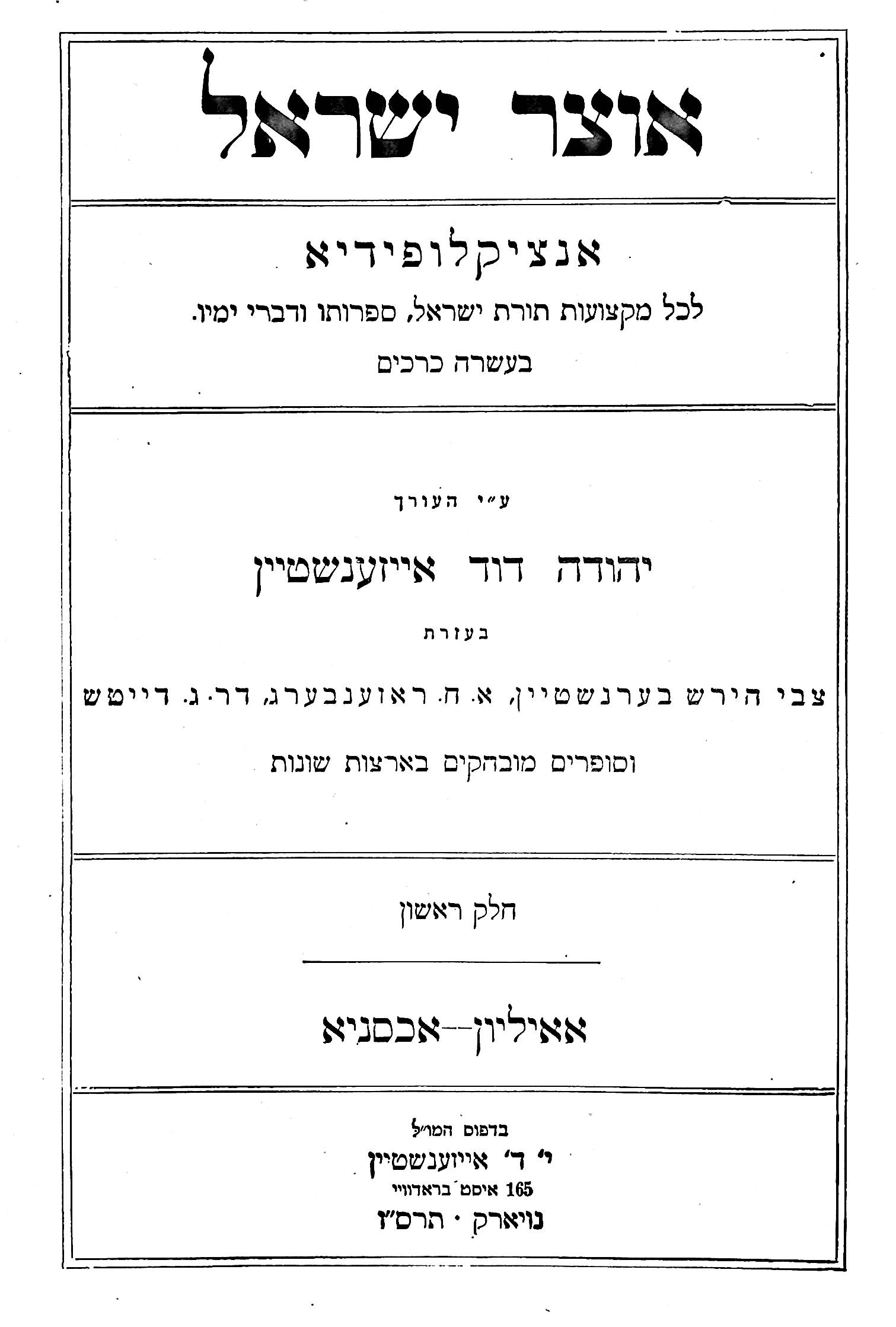 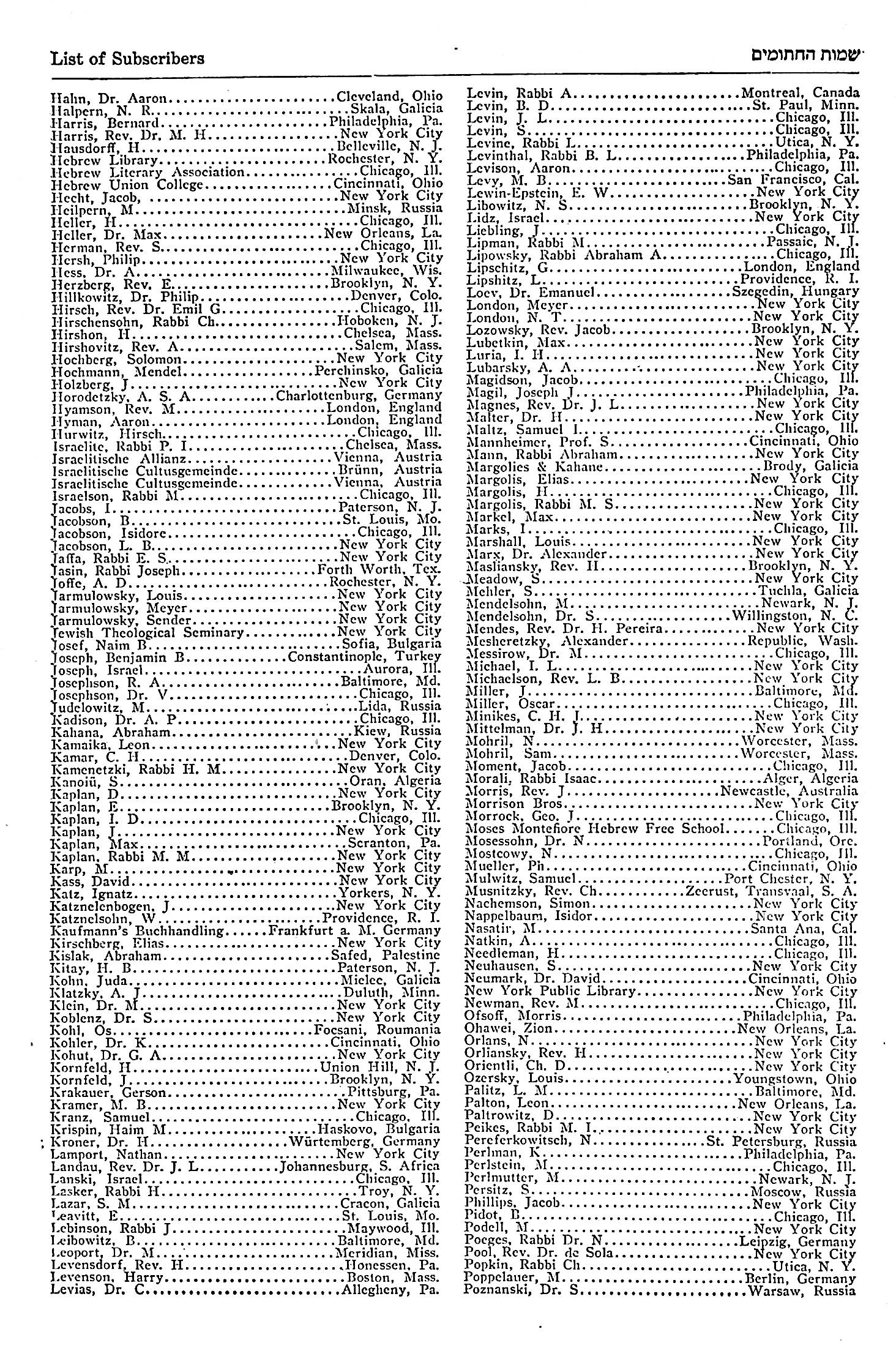 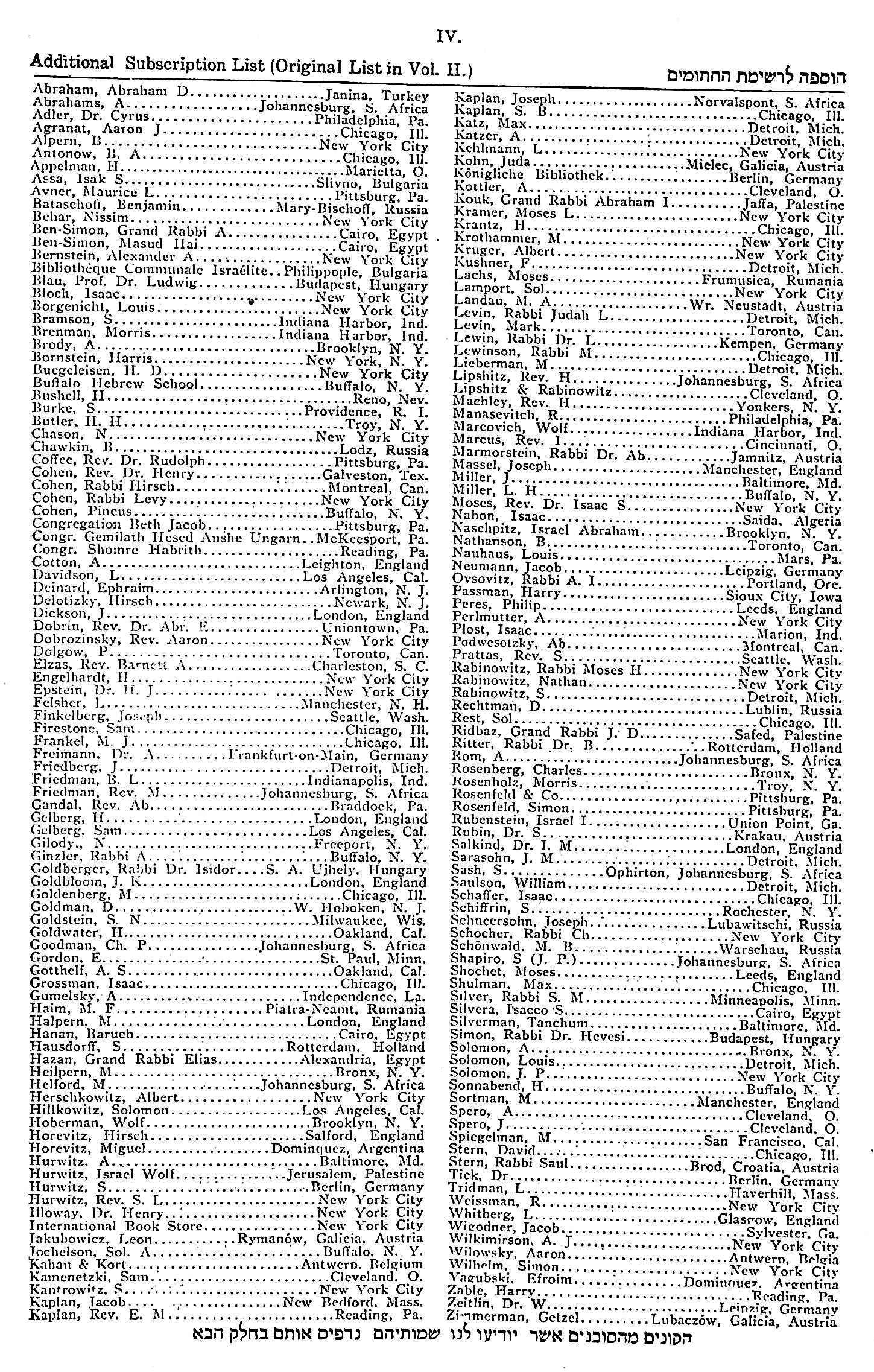 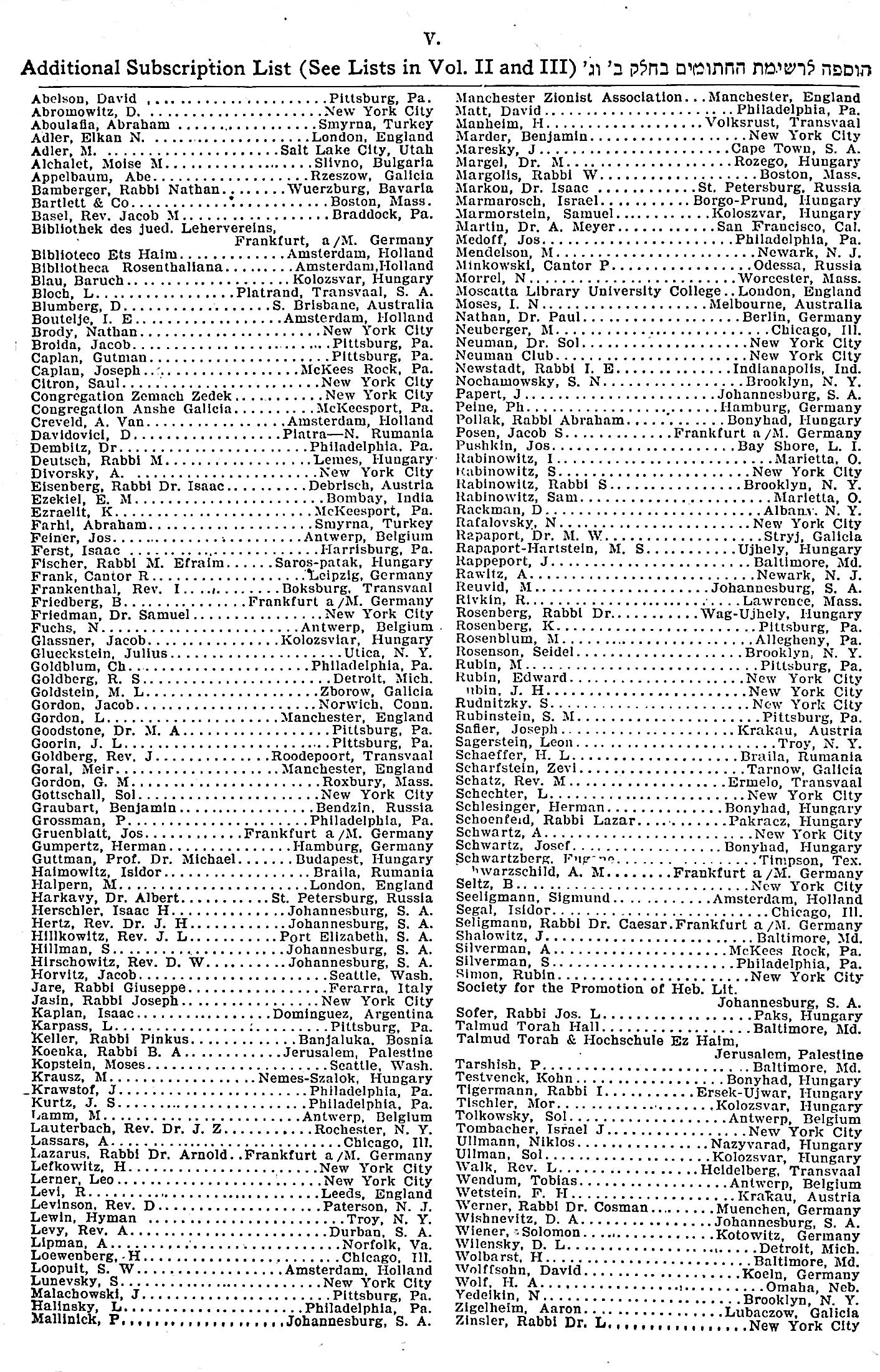 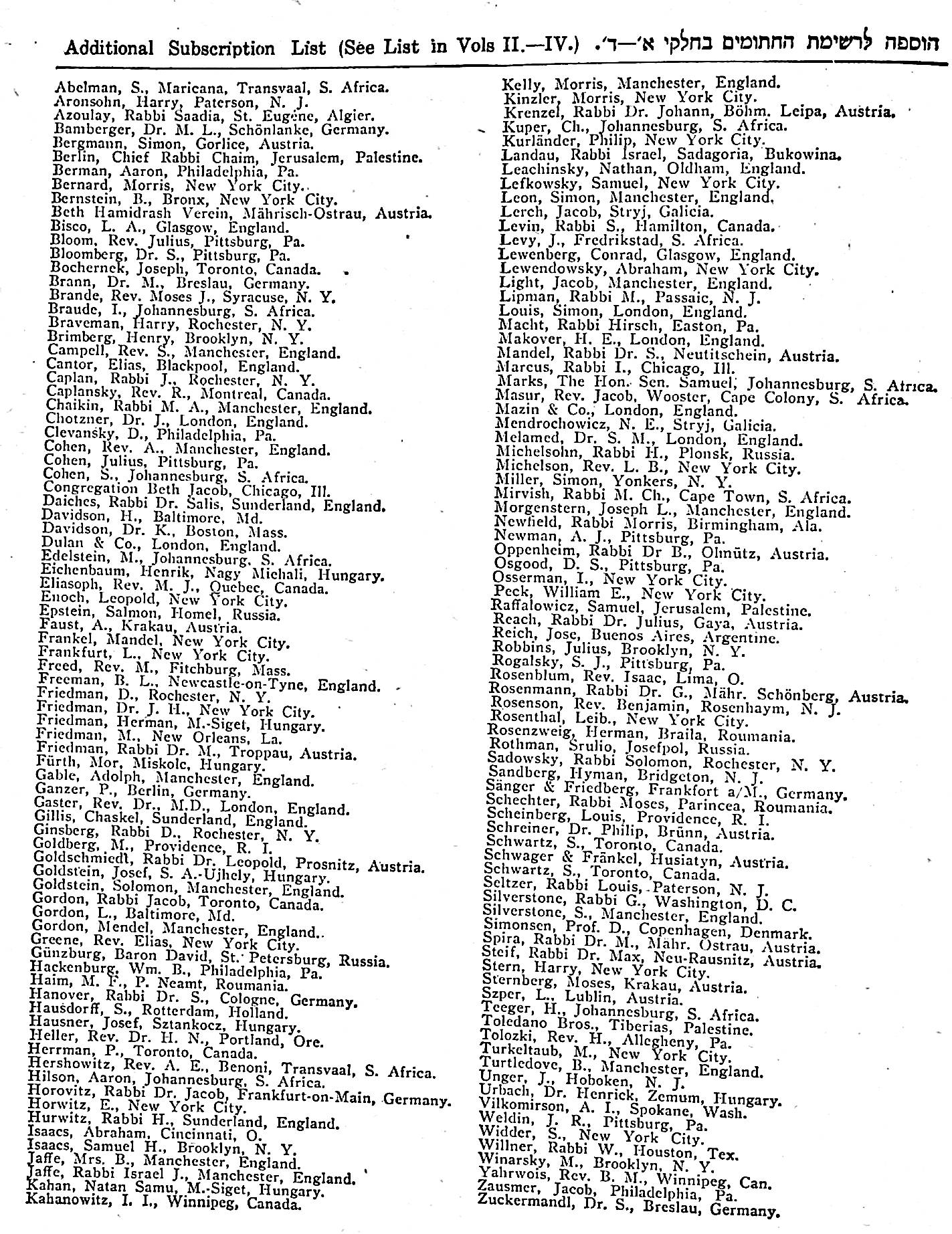