The first Chassidic Rebbe who made his home in London between the two World Wars was Rabbi Chanoch Heinoch Dov Rubin, the Rebbe of Sassov.  He came to London in 1925 with his wife and three young children and established a small beis midrash (house of study) at 14 Fordham Street in the East End.  My book has the stamp from this small Sassover shtiebel.  Rabbi Rubin is said to have radiated warmth and kindliness, and he attracted followers from London and the provinces.  He was known as a Baal Tzedakah (which means man of charity).  However, he became very ill and died in Westcliff at the age of 40 in 1929.

Rabbi Harry Rabinowicz tells the story of his funeral in his book ‘A World Apart:’

His body was taken from his Fordham Street home to the Dzikover shtiebl at 30 Dunk Street where eulogies were delivered by Rabbi Shulman, the Rabbi of the King Edward Street Synagogue, and by the rebbes of Premishlan and Biala (who was Rabbi Rabinowicz’s father – see The Will of the Biala Rebbe, also The Biala Rebbe’s copy of Moreh Nebuchim), as well as by other rabbis.  Chief Rabbi J. H. Hertz attended the funeral. At Edmonton Federation cemetery a eulogy was made by Rabbi Dr. Avigdor Schonfeld.

It was the Rebbe’s express wish that his eldest son, Rabbi Simcha Rubin, born in Sassov in 1910, would succeed him as the Rebbe of Sassov.  He signed my book.  In 1930 Rabbi Simcha married Chava, the daughter of Rabbi Dov Heschel of Lvov. one thousand people attended the wedding festivities at the Portman Rooms, Baker Street.  They included Flora Sassoon, the mother of the book collector David Solomon Sassoon, a learned lady of great poety. One of her essays is included in Rabbi Yoel Herzog’s book, Imre Yoel.

Rabbi Simcha had a warm relationship with his contemporaries, the London Rebbes of Premishlan, Biala, Shotz, Trisk and Dzikov.  They dealt with the harsh economic conditions of the prewar years, with their attendant problems of maintaining traditional standards of Chassidus and Yiddishkeit.  From the 1930s onward they dealt with the flood of refugees fleeing Hitler’s Europe.

In 1942 the Rebbe moved with his young family to North West London, where he established the present Sassover Beis Medrash at Helenslea Avenue, Golders Green. In 1957 the shul became the home of Yeshivas Chayei Olam.

During the war years, the Sassover Rebbe worked tirelessly, helping destitute refugees who found safety in Great Britain with food, lodging and employment. He took young orphans into his own home, and established a hostel for others to ensure that in addition to their physical survival, they received the warmth and kindness that they needed so badly.

He was a major dispenser of charitable funds who was determined to remain anonymous and arranged with his bank to issue him checkbooks with no identifying name or institution imprinted on them.

The Rebbe’s lifelong commitment to the maintenance of the highest standards of modesty (tznius) was legendary. Each year, with the approach of the summer, he would write a message in orthodox Jewish  newspapers in English reminding Jews to maintain these standards during this time, whether at home or abroad.

He regularly offered advice on moral issues, not only to his Orthodox Chassidim, but to Anglo Jewry as a whole.  In 1988 he wrote in the Jewish Tribune: ‘to me, all Jews are the same and I hope they will take notice’.

Following the death of his wife, he married Minna Weber, who passed away a few years before he did, in 2003.

All of this leads up to the question “what was the Rebbe reading?”  The three books bound together in this volume are from different periods and are all written by Rabbis whose name was Yaakov.  I bought this book from Israel Mizrahi of the Mizrahi bookstore in Brooklyn, New York – and I am not sure how it travelled from London to New York.

The first book is called Nachalas Yaakov by Rabbi Abraham Yaakov Kamenetzky.  It was printed in 1932 in Vilna and is quite short – just 30 pages.

The book starts with a short letter from the religious leader of Eastern European Jewry at the time, Rabbi Chaim Ozer Grodzinsky, followed by two haskamos (approbations): 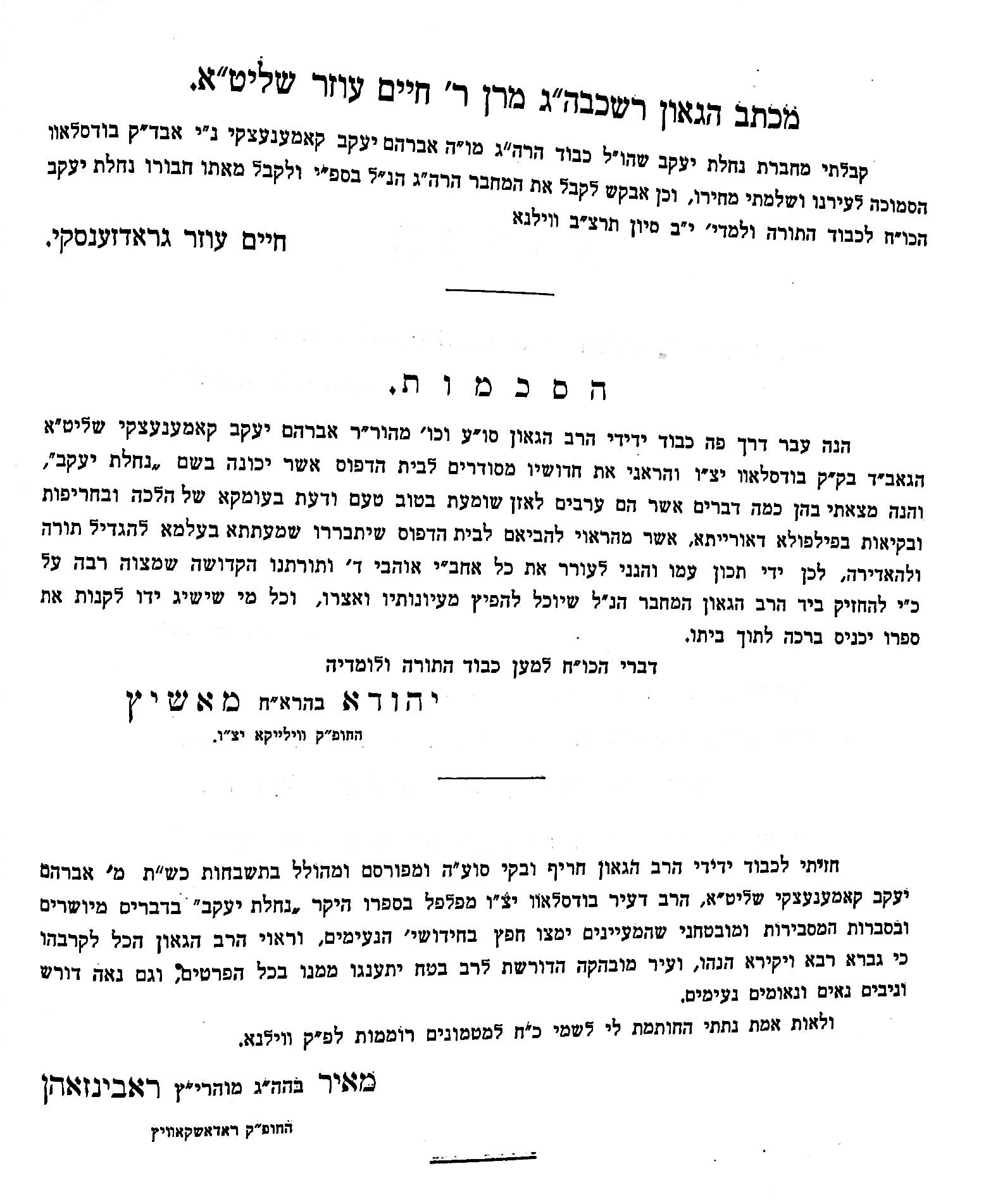 The second book is called Yeshuas Yaakov Acharon, by Rabbi Yaakov Borshtein.  It was printed in 1901 in Warsaw, and has approbations from the leading Rabbis of Warsaw of the nineteenth century, Rabbi Yitzchak Feigenbaum, Rabbi Shmuel Zundel Klepfish and Rabbi Chaim Eliezer Waks: 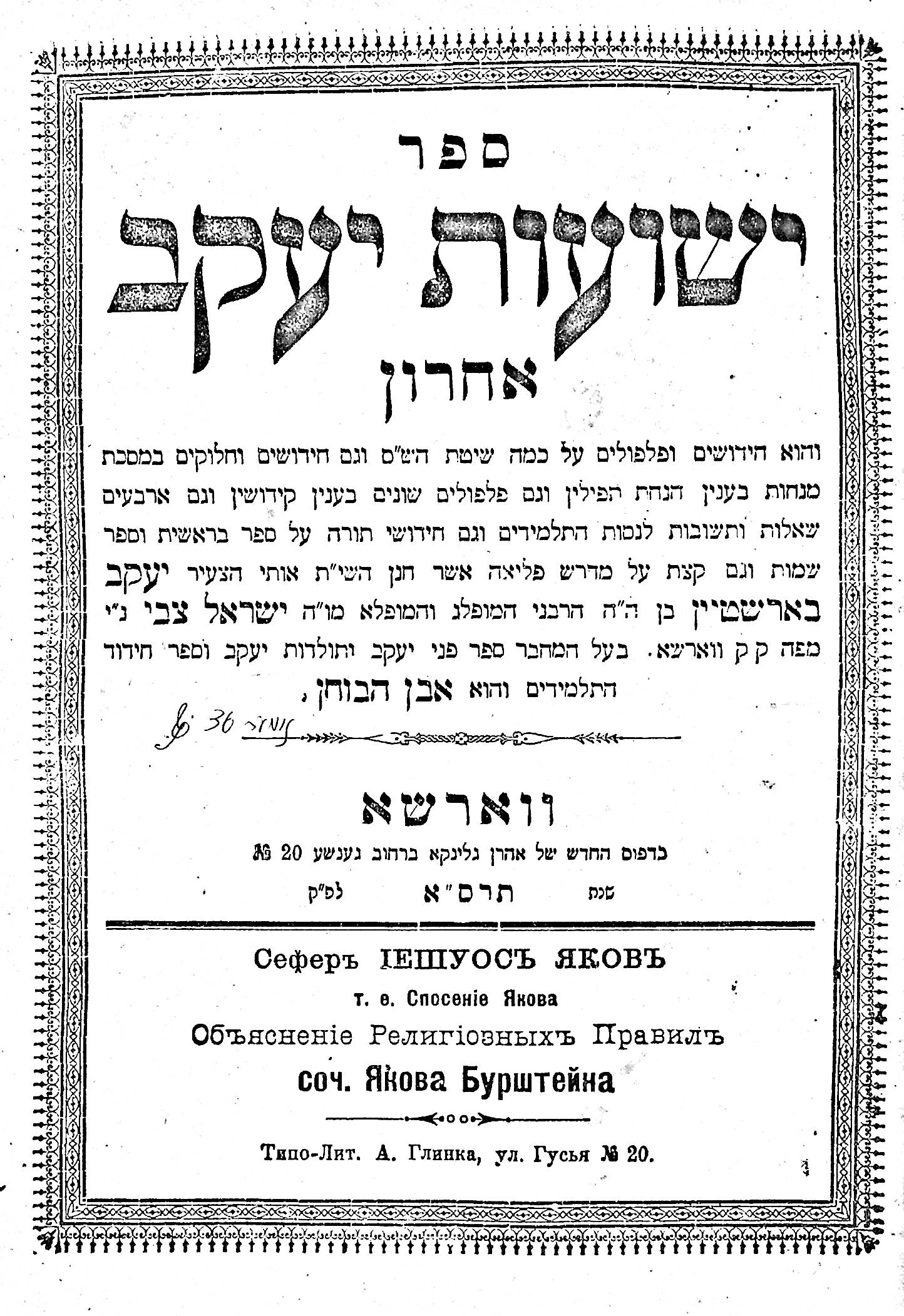 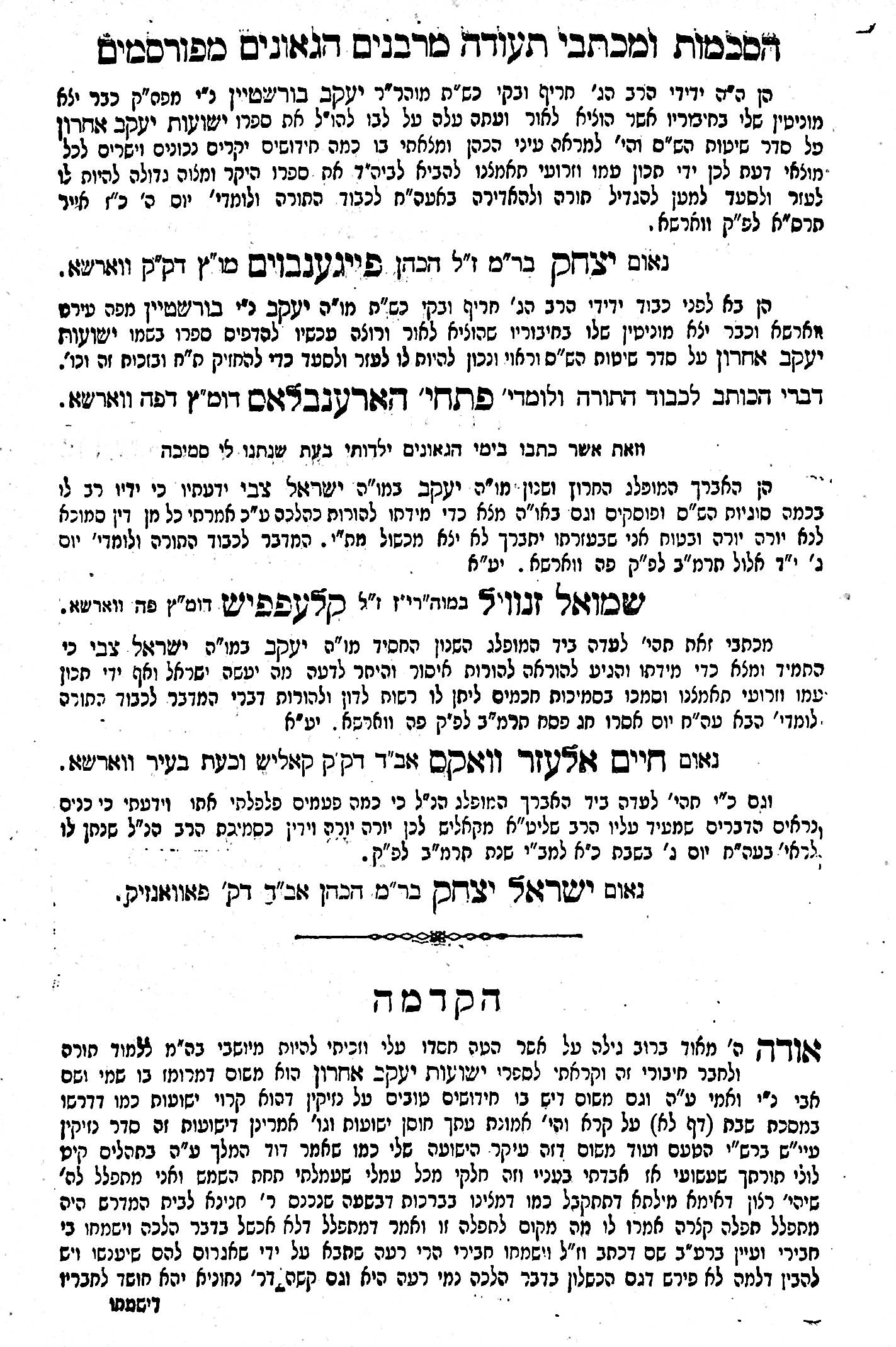 The third book is different to the others.  It is called Bais Yaakov, and is by Rabbi Yaakov Hubscher, who taught at the famous Yeshiva in Berlin – the Hildesheimer Rabbinical Seminary founded by Rabbi Azriel Hildesheimer. Rabbi Hildesheimer was an intellectual leader of orthodox German Jewry.  The book is dedicated to his som, Rabbi Meir Hildesheimer (1864-1934) who was the executive director of his father’s seminary.  It has approbations form Rabbi Hildesheimer and also Rabbi Dovid Tzvi Hoffman (1843-1921) who was the head of the yeshiva in Berlin.  It is interesting that this book belonged to the Sassover Rebbe. 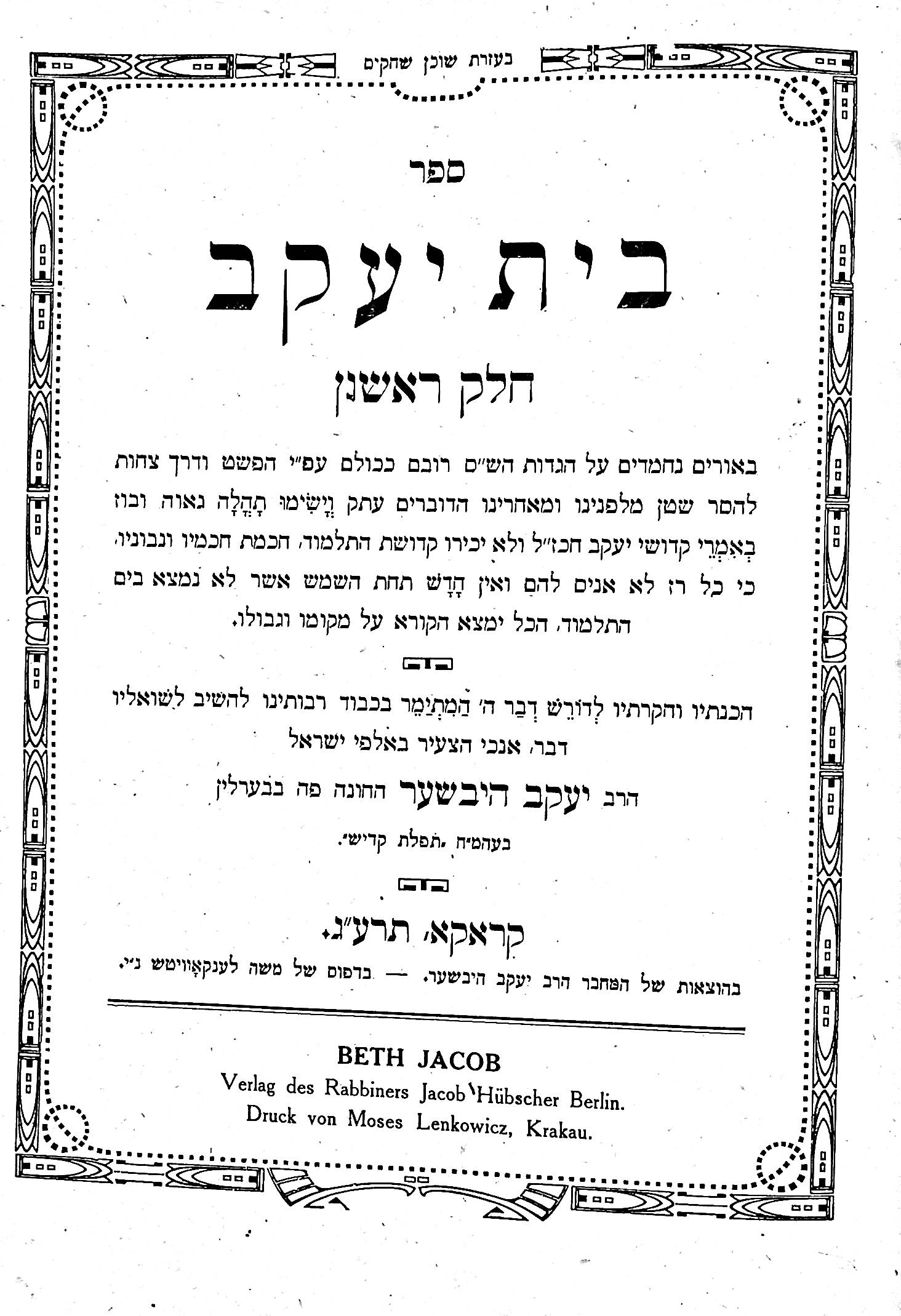 And here below is the prenumeranten (subscription) list of the supporters who financed the book.  A very interesting list, mainly from Berlin: