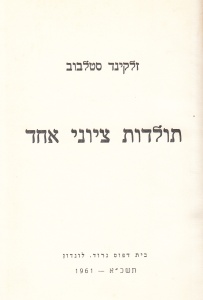 Zalkind Stalbow was an early British Zionist.  He was born in Vidzy, near Vitebsk, in May 1878, and emigrated to London at the turn of the century.  This book is his autobiography – the story of a remarkable life.  it was printed in London by the Narod Press.

An early member of the Chovovei Tzion (Lovers of Zion), which was a Zionist group active before Herzl and the Zionist Organization, he combined over 50 years of fervent Zionist activity in Britain with decades of living cultivating his farm in Rehovot, Israel.  He did this by working in his business in Britain for part of the year and travelling to Palestine, now Israel for the other part of the year.  He bought property in Rehovot in the 1920s, and there is a street named after him.

(I remember his son, Geoffrey Stalbow, active in Kingsbury Synagogue, who ran the childrens’ services on Shabbos mornings for many years.  A kind and likeable man, with a moustache and bowler hat, and a slight military bearing – I believe (not sure) that he was in the Royal Artillery during the War.)

The foreword was written by Sir Leon Simon, a leading British Zionist intellectual and civil servant who took part in the drafting of the Balfour Declaration of 1917 and served on the Zionist Commission with Chaim Weizmann.

Zalkind Stalbow was a Hebraist, a walker, and a constant critic of the official Zionist bureacracy.  His view was that personal involvement and settlement in the Jewish State were more important than the giving of funds.  He played a part in founding several companies that were important in Israel’s development.  Into old age, he regularly took part in a three-day annual march to Jerusalem.  Here are some pages from his autobiography…