Part one of this book appeared in 1910, printed by Israel Narodiczky in Whitechapel, London, and was reviewed by the Jewish Chronicle in the issue of April 1st, 1910. Yoel Horowitz, who was apparently both a businessman and a scholar, was the son of Rabbi Alexander Horowitz from Stanislav, who was the son of Rabbi Yakov Yehoshua from Brody and Rabbi of Zlozitz.  (I am not sure – but he may be identical with the Yoel Horowitz who died in Amsterdam on 29th January 1925, aged 86 or 87.)  He was encouraged to publish a selection of his Notes on the Talmud by Isaac Last, a scholar living in Ramsgate, England.

The title Yavo, or Yud Beis Aleph, is a pun on the author’s and his father’s name, Yoel ben Alexander.  The Jewish Chronicle describes the book as having “freshness and charm” as well as “learning and research”.

The book could not be bought for money. You had to write to the author at 128, Isabella Avenue, Antwerp, and only the very small number of 200 copies were printed, which makes it quite rare.  I have been unable to find a copy of the first volume.  The publication of the second part was noted in the Jewish Chronicle of 14th April 1911.  There was a copy on the Cambridge University Library. 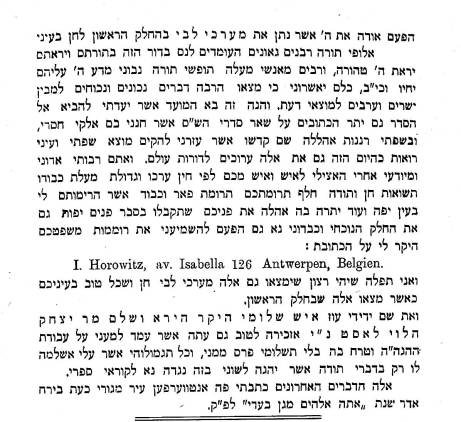 Isaac Last, who encouraged and proofread the book, is an important but almost forgotten European born Anglo-Jewish scholar.  He is mentioned in this scan, which is actually from the last page. In his later years he was a scholar-in-residence at the Judith (Lady) Montefiore College at Ramsgate.  He was the editor and annotator of the medieval commentator Joseph Ibn Kaspi, and had also published other manuscripts by Kaspi.  The Jewish Chronicle described him as a “literary revivalist”. he died on 3rd November 1913 at the college in Ramsgate.