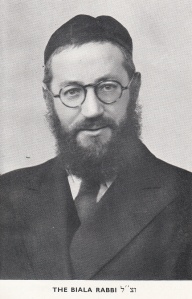 He came to London on 18th December 1927 and established a small shteibel at 6 Osborn Place, Chicksand Street., off Brick Lane.  In 1931 he bought a house at 10 St. Marks Road, Dalston and established another shteibel there.  The Rebbe attracted devoted and dedicated followers, who are described in his son Rabbi Dr. Harry Rabinowicz’s book, “A World Apart, The Story of the Chassidim in Britain.  The impact the Rebbe made was apparently considerable, attracting followers from all walks of life.  They were conquered by his humanity, his personality,  and his genuine friendship and approachability.  He had a fiery enthusiasm that was said to be foreign to the Jews of north-east London.   He was a mystic and a man of the world, and people would come to hear him speak and expound on the Torah at Seudah Shlishit and Melave Malka.

The Rebbe became ill suddenly in 1947, with just a short time to live, during which he wrote his ethical will.  It was not written for publication, but after his death a committee was formed to publish it in Yiddish, Hebrew and English.  It was printed at the Narodiczky Press.

My copy has the original letter from the publication committee.

The ethical will, written on the brink of death is a loving and enlightening message to his wife, children, and closely knit Chassidim.

“My dearly beloved wife, know that the small part of saintly sentiment to which I have been privileged to attain through the study of the Torah, came to me through the influence of the home of your saintly revered father, of whose pious deeds I never tire of observing, and who was particularly fond of me, as you know….therefore I leave you the following small gift.  In all the Torah which I have learnt and in all the precepts – however few – which I have performed from the time when I became responsible for my actions until my decease, you shall have an equal share, no less.”

He wrote “I beg of those who attend the Beth Hamidrash to keep up the Beth Hamidrash and pray there regularly.  Even if they find it necessary to pay some men for the evening service, they should do so. they should also arrange Seudah Shlishit every Sabbath as they did during my lifetime without any change whatsoever.  They will then perform a kindness to my soul which needs the mercies of the Holy One, blessed be He.”

“I beseech the members of the Beth Hamidrash always to live in harmony and not to secede from the congregation, for great is the blessing of peace, and if God grants I will plead on their behalf in the world of eternity.”