The Chief Rabbi, Dr. J. H. Hertz’s little book of Jewish Thoughts is ubiquitous and has gone through many editions with ten of thousands of copies printed. I am always amused when I see copies on ebay at fancy prices, as if it was rare.  However, my copy is unique.  It belonged to Dayan Mark Gollop, who was the Senior Jewish Chaplain to H. M. Forces.

Dayan Gollop was born in Russia and came to England at the age of 13. After attending the Beth Hamedrash for Rabbinical studies he was appointed, in his 18th year, a member of the teaching staff of the Great Garden Street Talmud Torah, a post he resigned on entering Jews’ College and University College, London.

From 1906 until 1913 he devoted himself to several social, educational, and Zionist movements in the London. He was one of the founders of the Jewish National Institute, conducting a Talmudic Circle there for some time; founded the Young Hebrew Association, and took a leading part in the study circles of this organisation and of the
London University Zionist Society; was on the committee of the Union of Talmud Torah Teachers; and was Hon. Financial and Joint Secretary of the Association of East London Zionists. 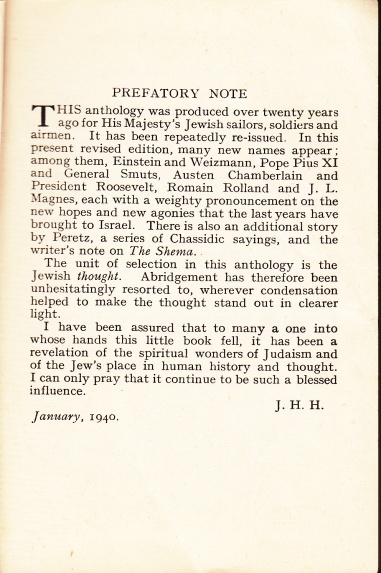 In 1913 came an appointment—as minister to the Southend and Westcliff Congregation, and during the 1914-18 war the young minister was a Chaplain to the Forces, serving in
Salonika, Palestine, Egypt and Greece.  He was the only Jewish Chaplain with the British Salonika Forces and was Mentioned in Dispatches as a result of his work in this war zone.

He was appointed senior Jewish Chaplain in 1926 and was also appointed by the Army Council to serve on the lnterr-Denominational Advisory Committee on Chaplaincy services at the War Office.

In 1921 Reverend Gollop was chosen by the Bayswater Synagogue to succeed Rabbi Sir Hermann Gollancz as minister. He gained his Rabbinical Diploma in 1924 and in 1929 was appointed as assistant Dayan on the London Beth Din.  The following year he succeeded the Rev. A. A. Green as Rabbi of the Hampstead Synagogue. 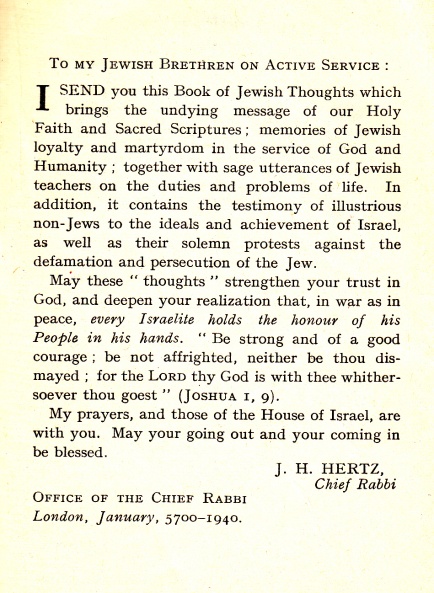 Dayan Gollop’s duties as Senior Chaplain became more arduous with the outbreak of the Second world War.  After a visit to France early in 1940 he arranged for the appointment of Jewish chaplains for the British Expeditionary Force and later for troops in other war zones.

He edited the new edition of the Prayer book for Jewish Members of H. M. Forces, for which click here.

His health broke down in October, 1943 and early in the following year he resigned from all his duties both as minister and senior Jewish Chaplain.  He died in August 1950.